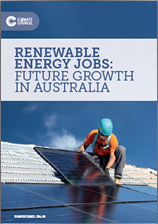 Moving to 50% renewables by 2030 would create more than 28,000 jobs nationally, new research by Ernst & Young (EY) and the Climate Council has found.

The net effect on jobs of 50RE is positive across Australia and each individual state: every state will experience net job growth.

Unlike other industry transitions such as in automotive manufacturing and steel smelting, which have seen many jobs move offshore, a transition to 50RE will create jobs in Australia.

Most states will see half of all new jobs created in rooftop solar photovoltaics (PV): rooftop solar PV jobs are generally accessible, being located in areas where people already live and work.