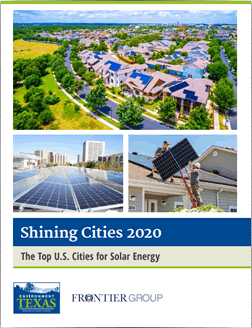 Solar power is expanding rapidly. More solar capacity was added to the grid in 2019 than any other energy source. The United States now has more than 77 gigawatts (GW) of solar photovoltaic (PV) capacity installed — enough to power more than one in every 10 homes in America. Hundreds of thousands of Americans have invested in solar energy and millions more are ready to join them.

America’s major cities have played a key role in the clean energy revolution and stand to reap tremendous benefits from solar energy. As population centers, they are major sources of electricity demand and, with millions of rooftops suitable for solar panels, they have the potential to be major sources of clean energy production as well.

Our seventh annual survey of solar energy in America’s biggest cities finds that the amount of solar power installed in just seven U.S. cities exceeds the amount installed in the entire United States at the end of 2010.

Of the 57 cities surveyed in all seven editions of this report, almost 90 percent more than doubled their total installed solar PV capacity between 2013 and 2019.