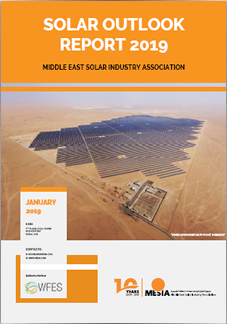 Solar energy has continued to gain momentum globally and in the MENA region. As of H1 2018, over 470 GW of solar PV was installed worldwide, and 100 GW alone was added in 2017 (Figure 1). Within MENA, growing populations, economic growth and increased industrial activity have led to rising electricity demand. Since 2013, the population in the region has grown by almost 8%1 and is set to continue growing, adding increased pressure on existing power assets.

As MENA countries move towards achieving their respective renewable energy targets, below are some of the major highlights from 2018:

• The 200 MW Kom Ombo solar PV project in Egypt and Jordan’s Round 3 PV auction both received bids below 3 US$ cent/kWh. In addition, the Egyptian government has requested bids no higher than 2.5 US$ cent/ kWh for the ongoing 600 MW solar PV West of Nile tender

• Saudi Arabia’s 300 MW solar PV Sakaka project, the first utility scale project in the country, was awarded at 2.34 US$ cent/kWh and began construction in November 2018

• Morocco’s 580 MW Noor II and III projects at the Ouarzazate solar complex, one of the largest in the world to consist of PV and CSP, are due to be completed by the end of 2018