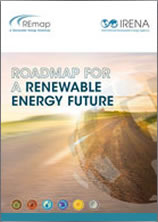 REmap determines the realistic potential for countries, regions and the world to scale up renewables in order to ensure an affordable and sustainable energy future.

REmap is unique in that is assesses worldwide renewable energy potential assembled from the bottom up, starting with separate country analyses done in collaboration with country experts, and then aggregating these results to arrive at a global picture.

The analysis encompasses 40 countries representing 80% of global energy use. The roadmap focuses not just on renewable power technologies, but also technology options in heating, cooling and transport.

In determining the potential to scale up renewables REmap focuses on possible technologies pathways and assesses numerous other metrics, including: technology, sector and system costs; investment needs; externalities relating to air pollution and climate; CO2 emissions; and economic indicators such as employment and economic growth.

Based on these country driven results, REmap provides insights to policy and decision makers for areas in which action is needed.

Some of the key findings from the 2016 edition of the REmap global report  include: