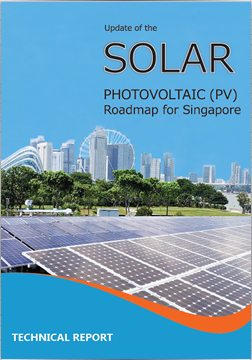 Report released by the Solar Energy Research Institute of Singapore (SERIS) updating the previous version published in 2014. This updated  “Solar PV Roadmap for Singapore” report covers the timeframe until 2030, with a projection until 2050.

Solar energy remains Singapore’s most viable renewable energy source and the Singapore government recently announced that the City State is committed to deploying at least 2 GWp of solar energy by 2030 – enough to meet the annual power needs of around 350,000 households in Singapore. This would increase solar adoption in Singapore by about eight times from today's installed capacity. At this level, Singapore would be one of the leading solar countries in the world, in terms of solar PV capacity deployed per square kilometre of land area.

Against this backdrop, several government agencies (National Climate Change Secretariat under the Strategy Group, Prime Minister’s Office, Singapore Economic Development Board, and the Energy Market Authority) commissioned this study, with a view to update the original PV Roadmap. The update aims to elaborate in detail the technical potential of solar deployment in Singapore, the possible pathways and the cost to achieve them, and how Singapore’s economy could eventually benefit from this.